Ruby was diagnosed with advanced stage osteosarcoma and a bone fracture on April 15, 2013. She’d been suffering from what the vet thought was arthritis and hip dysplasia for about a month. Her suffering ended on April 16, 2013. She’s gone to a happy place in the sky. She is survived by her older sister, Sage; owners’, Mike, Zack, and Garrett; and many close friends and family members. She was loved and will be missed by many. 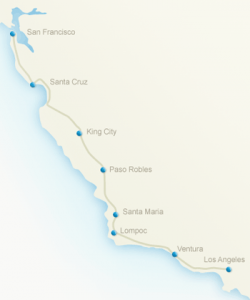 This is one of the more common questions I am asked when I tell people I’m participating in AIDS/LifeCycle 2013. Here’s a recap of the day-by-day miles and start/finish cities. 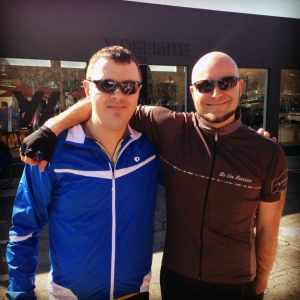 Right before Christmas break, I received exciting news from my employer. My month-long sabbatical, which I applied for in November had been approved.

A major part of my sabbatical will be spent raising money for and riding my bike in AIDS/LifeCycle. AIDS/LifeCycle is a 7-day bike ride from San Francisco to Los Angeles to raise money and awareness in the fight against HIV/AIDS. The 545-mile ride takes place June 2-8, 2013.

After announcing the news on Twitter, I soon realized several friends from Los Angeles were also participating in the ride. Many have done the ride in the past, and ride on a team, called the Pork Pedalers. They invited me to join, and excitedly, I took them up on the offer.

Beginning in January, I’ve been doing a spin class 3 times per week. At times, even an hour of pedaling with your heart rate above 150 has been a challenge, but it’s getting easier every day. I’m hoping for warmer weather soon so I can get out on the road for some real riding.

To ensure success of the event and make the biggest impact, I must raise at least $3,000. I’m confident with your support; I can exceed that. I’m already one-third of the way there!

When you grow up you tend to get told that the world is the way it is and your life is just to live your life inside the world. Try not to bash into the walls too much, try to have a nice family life, have fun, save a little money.

That’s a very limited life. Life can be much broader once you discover one simple fact, and that is that everything around you that you call life was made up by people no smarter than you. And you can change it, you can influence it. You can build your own things that other people can use.

The minute that you understand that you can poke life and actually something will, you know if you push in, something will pop out the other side, that you can change it, you can mold it. That’s maybe the most important thing. Shake off this erroneous notion that life is there and you’re just going to live in it, versus embrace it, change it, improve it, make your mark upon it. I think that’s very important and however you learn that, once you learn it, you’ll want to change life and make it better.

Once you learn that, you will never be the same again.