When I first read about AIDS/LifeCycle (ALC), a 7-day, 545-mile bike ride from San Francisco to Los Angeles, it immediately appealed to me. I was eligible for a one-month sabbatical but wasn’t sure I’d be able to take time off in June, because of a high-priority project with a launch date of June 11, 2013. I was thrilled my sabbatical request was approved in December 2012.

My first ALC ride was one of the most amazing experiences of my life. The unpleasant thoughts quickly faded upon experiencing the energy and passion of other ALC riders and roadies. Everyone on the ride was more than happy to chat and get to know you. Riders were also very friendly when something went wrong. I had one flat tire during the ride; I was with my friend David, who stopped to offer emotional support. David gave a thumbs-up to each rider who passed, as I fixed the flat tire.

This year was a historic one for ALC. With the help of thousands of generous donors, 2,203 cyclists and 552 roadies (volunteers) raised $14.2 million dollars to support the parent organizations and the services they provide to those in California. I had the opportunity to meet a small fraction of the nearly 3,000 people involved, but every interaction I had was delightful.

Initially, my intent was to write a blog post each day of the ride. I thought I’d have plenty of time each day to collect my thoughts. After posting on an ALC riders Facebook group, I found out the days are quite busy and taking a laptop or iPad isn’t a good idea.

Most days, I’d start out riding with my team, the Pork Pedaler’s or with friends who were members of Seattle-based Team of One. By mid-day, you’d break into smaller groups of riders who were riding at your pace.

Each day when you ride into camp, you are greeted by a crowd of cheering, enthusiastic roadies. The first thing you do is park your bike in the huge secure bike parking. Then make your way to your gear truck to pick up your luggage and tent. You find your space on the grid and set up your tent, and unpack your belongings for a much-needed visit to the shower trucks. I’ve not seen shower trucks before; they are semi-trailers with about 20-25 private shower stalls each. The water pressure was excellent, but I forgot to pack a towel. Luckily, my friend Matt packed an extra!

After a shower and shave, if you had laundry to wash, you’d head over to the cold wash stations. After all this, it was time for dinner and evening announcements. By the time dinner wrapped up, it was 8 pm at which time you’d head back to your tent to wind down and prepare for the next day. We had a few fun nights where we gathered to play board games, or we went to a nearby restaurant for some non-camp food. In the early-evening when camp started to fill up, mobile phone and data service would quickly diminish.

The thing I liked most about the ride was the diversity of people. There were people of all skill and fitness levels, people from all backgrounds, nationalities, races, and age groups. There were gay, lesbian, straight, HIV-positive and HIV-negative people. I sometimes see these groups co-mingling in Kansas City, but it’s with far less frequency, cohesiveness, and energy toward a common goal. Everyone was so invested in ALC and had a heartfelt story about why they were riding.

What does one do on a bicycle for 6 to 12-hours a day? ALC bans listening to music via headphones, portable speakers, or mobile devices for safety. Riders are required to ride single-file, except when passing. As a result, you focus on the road, the beautiful sights, smells, and sounds. You do lots of thinking. Many thoughts crossed my mind as I rode:

On Day Seven, we rode from Ventura to Los Angeles. It was a relatively easy 60-miles with a few rolling hills and beautiful views of the Pacific Ocean. The best part of the day was seeing my friends, Mike, Zack, Scott, and Shawn at the finish line. I said goodbye to ALC friends from California, Portland, Denver, Birmingham, Seattle, and even a cyclist from St. Louis.

In closing, I’ll share a random powerful moment one night at dinner. One night, our team table filled up quickly. I ended up having dinner across from a middle-aged gentleman with disabilities. He had to communicate by typing on an iPad. He had trouble communicating with me and was even having trouble eating. I wish I could have talked with him more and shared how much I admired his will and his passion. I wish I would have hugged him. Tears streamed down my face as I walked back to camp.

I’m so thankful my employer offered this opportunity. A month away from work to do something meaningful to me and thousands of others in California and across the world. 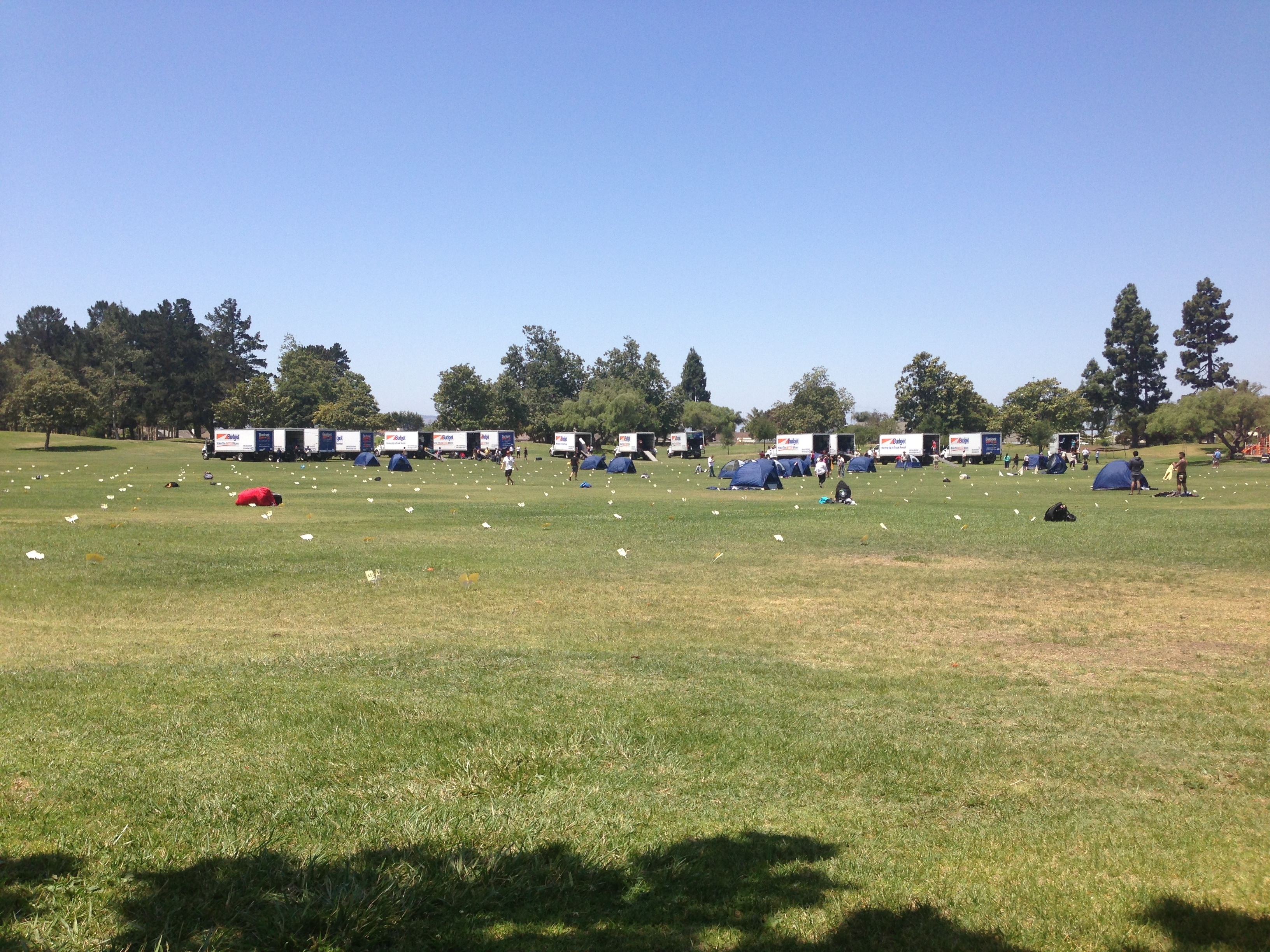 With 5-days to go, I’ve shipped my bike to SF and packing is near complete. If you’re wondering what 7-days of packing for a 545-mile bike ride looks like, here ya go. Pork Pedalers is my AIDS/LifeCycle 2013 team.  How many miles will I ride each day of AIDS/LifeCycle 2013?

Support me with a tax-deductible contribution 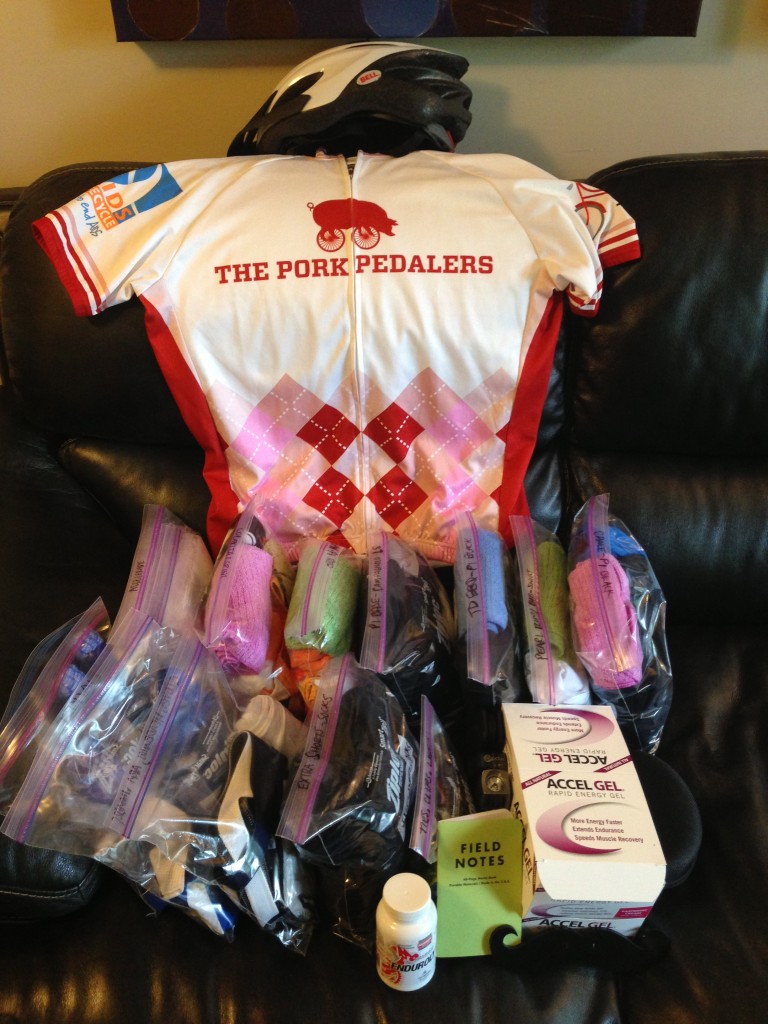 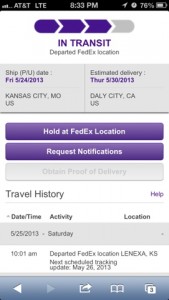 Nine-days until we ride from San Francisco to Los Angeles! I hit my fastest average speed yet at 17.8 mph during the 75th Street Brewery ride on Tuesday, 5/21/13. Map: https://app.strava.com/activities/55588711

No more outdoor cycling until the ride. Yesterday, I took my bike to Bicycle Shack to be boxed for shipping. I have to ship it by Friday, 5/24/13, to ensure it is received in time to be re-assembled and transported to Cow Palace, where ALC begins very early on Sunday, 6/2/13.